The use of eminent domain in this context is believed to only be used on mortgages not backed by the United States government. The proposed idea would only help homeowners who are employed and can pay back the mortgages. Essentially those who are backing such a strategy are trying to put people back in their homes through government action without costing taxpayers any money.

In the financial industry, however, they believe that this process will backfire and cause more problems than benefits. They believe that using eminent domain would cause investors to pull their money out of mortgage backed securities. Another belief is that it will penalize those who save and invest. Lastly, this could cause a chain reaction and there is no telling where they would stop after foreclosures. Many believe this would cause people to use such practices for things such as credit card debt as well.

Richmond, California was the first city to announce such a plan. Now, Irvington, NJ, may also be moving towards implementing a plan to use its eminent domain powers to purchase mortgages that are in foreclosure.
—– 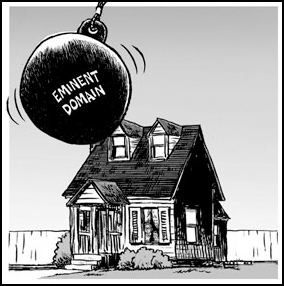 The foreclosure crisis has not only impacted many Americans, but it has also impacted many communities. Homes that fall into foreclosure often fall into a state of disrepair. That leads to increased blight, a continued negative downward spiral of decreased real estate prices, and depressed neighborhoods. Even in today’s improving real estate market, the continued blight of foreclosed homes continues to be a problem for many of our hardest hit communities.

One local community is attempting to take a novel approach to solving this problem. The mayor of Richmond, California believes that the banks put all these people into loans that they simply could not afford. Then the banks refused to work with any of the homeowners in an effort to renegotiate the loans to make them affordable.

Consequently, the mayor is threatening to use, and invoke, the government’s eminent domain power in an effort to buy back the property. Eminent domain is a process that involves seizing private property for public use. Government use of eminent domain is most commonly used in the construction of roads and other government infrastructure.

If Richmond proceeds with its plan, however, it would be the first city in the nation to use its municipal power of eminent domain for mortgages.

Richmond’s plan would involve acquiring underwater mortgages at steep discounts, and then restructuring them to make them affordable for homeowners. While Richmond’s elected leaders emphasized that they would prefer to acquire the mortgages through negotiations with banks and investment firms, eminent domain would be an option to force the sales.

Then, once the city owns the property, they will in turn sell it back to the homeowner at a nice profit. Probably most importantly, the homeowner will be afforded an opportunity to buy the home back at a price, and with interest rates, that they could afford.

The idea behind the plan is to try to use the government’s powers to strong arm the banks into negotiating with homeowners. Many banks are crying foul. They claim that if the government were to move forward with this eminent domain plan that it will chill many investors in the future from providing prospective homeowners loans in the community in question.

Too often in today’s partisan political gridlock politicians are simply afraid to think out-of-the-box. This is no doubt a new novel approach in an effort to solve an age-old problem. But the approach proposed by the Richmond city officials begs the question – is this truly a workable plan to help solve the on going foreclosure crises still gripping our nation and local communities?