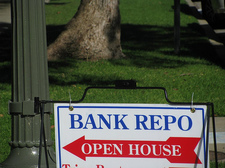 South Florida bank repossessions significantly increased in 2010 with an almost 80 percent increase over 2009. In total, banks took back 54,000 properties in Miami-Dade, Broward, and Palm Beach counties.

Miami-Dade County had the most activity with 23,000 repossessions taking place. However, this should not be too surprising since Miami-Dade County also has the largest population amongst the three counties.

As a result, 2010 takes the prize and wins the distinction of producing the most repossessions since the real estate crash started in 2007. It was nearly double that of 2009 when lenders repossessed 30,400 homes. 2008 had 26,650 repossessions, and in 2007 there were 10,100. This figures certainly show us how the real estate market has progressively worsened.

The high 2010 figures are the result of a lengthy foreclosure process that began back in 2008. It is possible that the strong absorption of new condos may be laying down a foundation for a stronger rental market going forward.

Its expected that the annual rise in repossessions will not hold in 2011. Foreclosure filings, the first step to repossessing a home, were down in 41 percent in 2010. The drop, however, may be in light of all the “robo signing” allegations, and on going investigation launched by Florida’s Attorney General regarding certain law firms and other issues pertaining to process servers and service of process.

Today’s current real estate market, and ongoing foreclosure crises, presents all sorts of issues that must be properly navigated. There are many factors contributing to Florida’s nation leading delinquency rates. They include a weak job market, weak economic recovery, and a major drop in home prices. Consequently, Florida’s housing market remains unsettled in large part due to the continued foreclosure crises.

Our Miami foreclosure defense lawyers have assisted many homeowners in buying enough time to reach the solution that is right for them. There are many alternatives to foreclosure, and often times it just takes proper planning to properly navigate against the potential pitfalls. Help is often available to those who seek it.
—–
EXTENDED BODY:
Consider Your Options. Contact Us Today.

We have been successful in defending many foreclosure cases when given an opportunity to develop a plan to properly defend the foreclosure.

If you are on the brink of foreclosure, need a real estate attorney, or just need to assess your legal rights, please contact our office today.