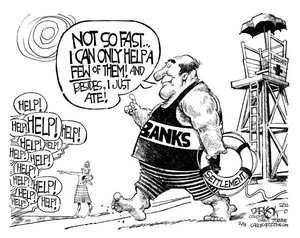 A mortgage settlement over the mishandling of millions of foreclosures was recently reached following 16 months of complex negotiations between 50 attorneys general and five major banks amid allegations of robo-signing and other abuses further fueling the foreclosure crises.

Under the terms of the settlement, those who have lost their homes or have fallen underwater on their loans could receive a $2,000 check, a $20,000 mortgage reduction or a lower interest payment.

But while everyone involved in procuring this deal should be applauded for their effort, the deal falls short. The deal is saddled with glaring limitations which will make it difficult to reach the millions of homeowners currently struggling.

For starters, the numbers simply tell us that this deal won’t reach that many people which means this settlement will be felt by just few fortunate individuals. Specifically, borrowers around the country owe more than $700 billion more on their homes than the homes are worth, yet the settlement offers only $26 billion in fines and relief to homeowners.

Additionally, approximately one million homeowners will have their mortgage debt reduced or loans refinanced at a lower interest rate, and up to 750,000 other borrowers who became victims of abuses in the foreclosure process could receive an average of $1,500 to $2,000. On the other hand, many estimate that some 11 million U.S. homeowners are underwater — they owe more on their homes than the homes are worth. Some 4 million are in foreclosure or seriously delinquent.

So to repeat, a mere cursory look at the numbers reveals that the deal won’t be as far reaching or helpful to the great majority of struggling homeowners.

But the deal has other limitations as well. The settlement is limited to five big banks that own the mortgages directly. Those include Bank of America, JP Morgan Chase, Wells Fargo, Citigroup and Ally.

It excludes private investors, other banks and — most important — mortgages backed by federal agencies known as Fannie Mae and Freddie Mac, as well as the FHA. These agencies, which are subject to controls from the executive and Congress, account for about 56 percent of all existing loans.

This settlement fails to satisfy the need for accountability by those responsible for the housing collapse. If the only punishment is a slap on the wrist, the mortgage industry will have learned nothing from this epic debacle.
—–
EXTENDED BODY:
Consider Your Options. Contact Us Today.

We are certainly in difficult times. At Alvarez & Barbara, LLP, we understand all of our client’s individual needs and pride ourselves in providing high quality service.